Celebrities Who ‘Killed’ It This Halloween 2017

Despite only taking off in Australia recently, Halloween is one of the year’s most exciting occasions. Not only does it bring with it a truckload of lollies and chocolate (and wine, if you’re lucky enough to be heading to a party), but it also signals an opportunity to come up with a creative costume.

Celebrities Who ‘Killed It’ This Halloween

From TV characters and pop culture references to inanimate objects, animals and even puns, we’ve seen it all over the years. Always a perfect point of reference, we hold out each year to see what the celebs come up with on October 31. And gosh, have we seen some ‘killer’ costumes this year!

Keep on reading to find out which celebrities ‘killed it’ with their Halloween costumes for 2017, and how you can recreate them for whatever spooky bash is on the cards next year. 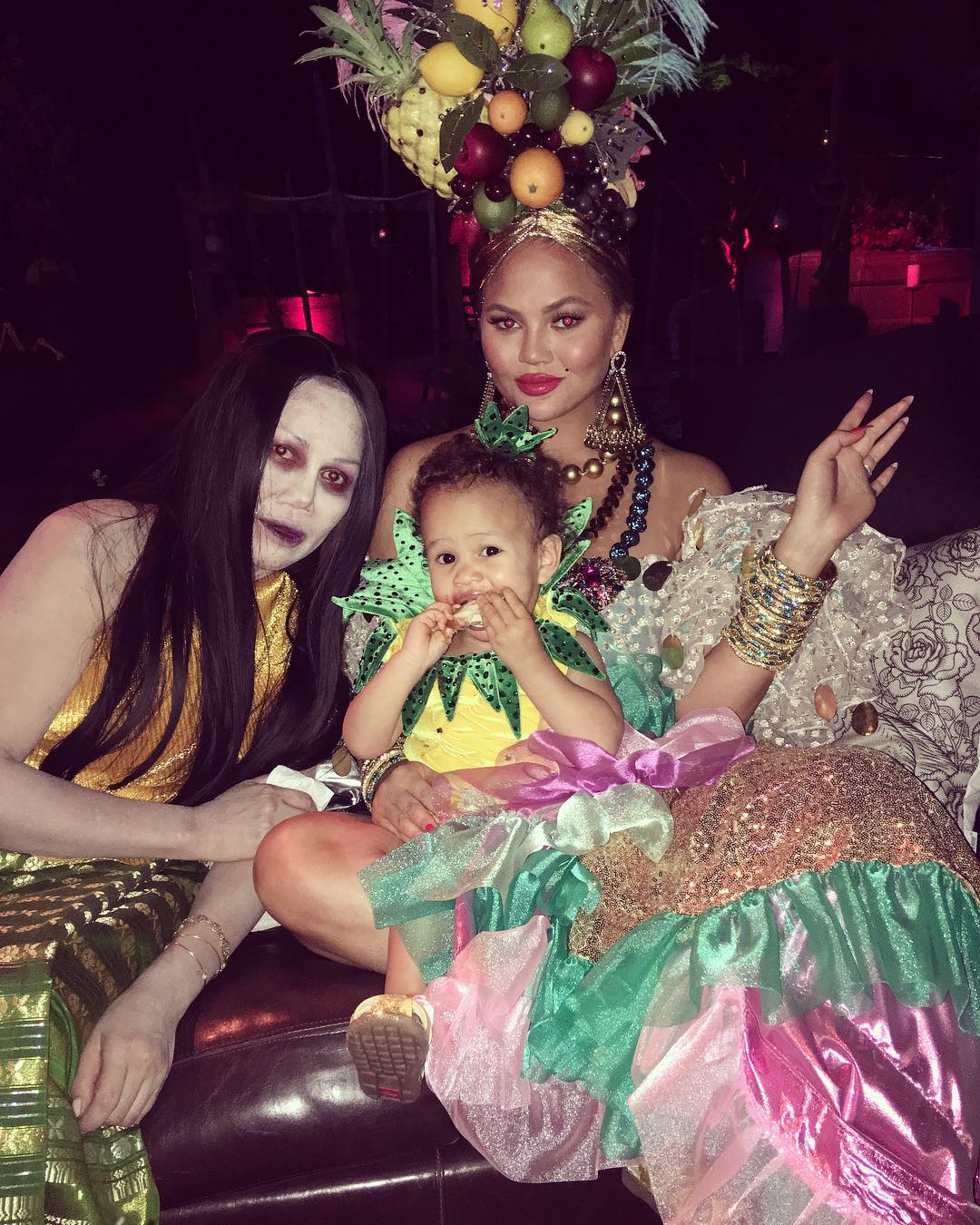 Chrissy Teigen is the queen of Halloween costumes, and if you deny this…well, you’re just plain wrong. From Mario and Princess Peach with hubby John Legend a few years ago, to a Toddlers & Tiaras-style brat and even iconic TV chef Guy Fieri, Chrissy has done it all.

This year, she went all out with an intricate, bejewelled costume that paid homage to famed performer of years past, Carmen Miranda in Copacabana. John joined in on the fun as Groucho Marx, who co-starred alongside Miranda in the hit 1947 film, and little Luna Legend topped off the family fun as a pineapple. Oh, Luna–gosh, do we love you, and your commitment to this costume.

Get Chrissy’s look with a pop of bright red lipstick, a fake mole using a gel liner or brow pencil, and some cheeky pink blush. Don’t forget to construct your own crown of fruit to truly do Carmen Miranda justice! 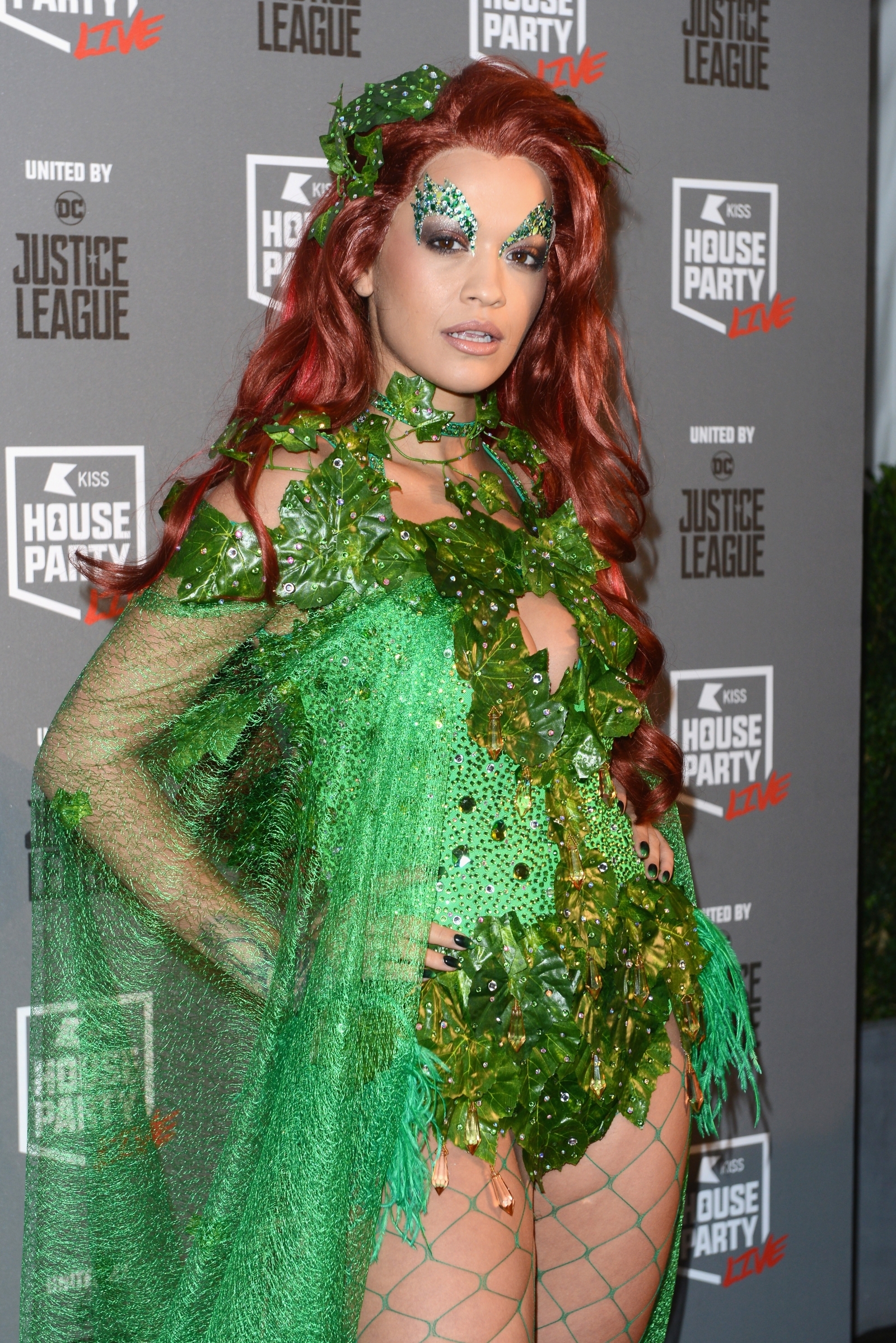 It’s no lie that Rita Ora is killing it this year. From hit single Your Song to hosting a season of America’s Next Top Model, the British singer is definitely making her comeback. ‘Halloween costume’ is just another thing to add to the list of things Rita is slaying in 2017.

Taking inspiration from the ever-successful DC Comics franchise, Rita posed as supervillain Poison Ivy for London’s Kiss House Party. This racy green get-up garnered the pop star a whole lot of attention, and we’re so here for it!

Though we can’t give much insight on how to create Rita’s leafy costume (Sparkles? Real leaves? You decide), recreating the makeup underneath should be a breeze. All you’ll need is a few smoky shadows for the eyes and a nude gloss on the lips. Make sure your base is flawless like Rita’s, especially if you’ll be partying it up in a crowded space! 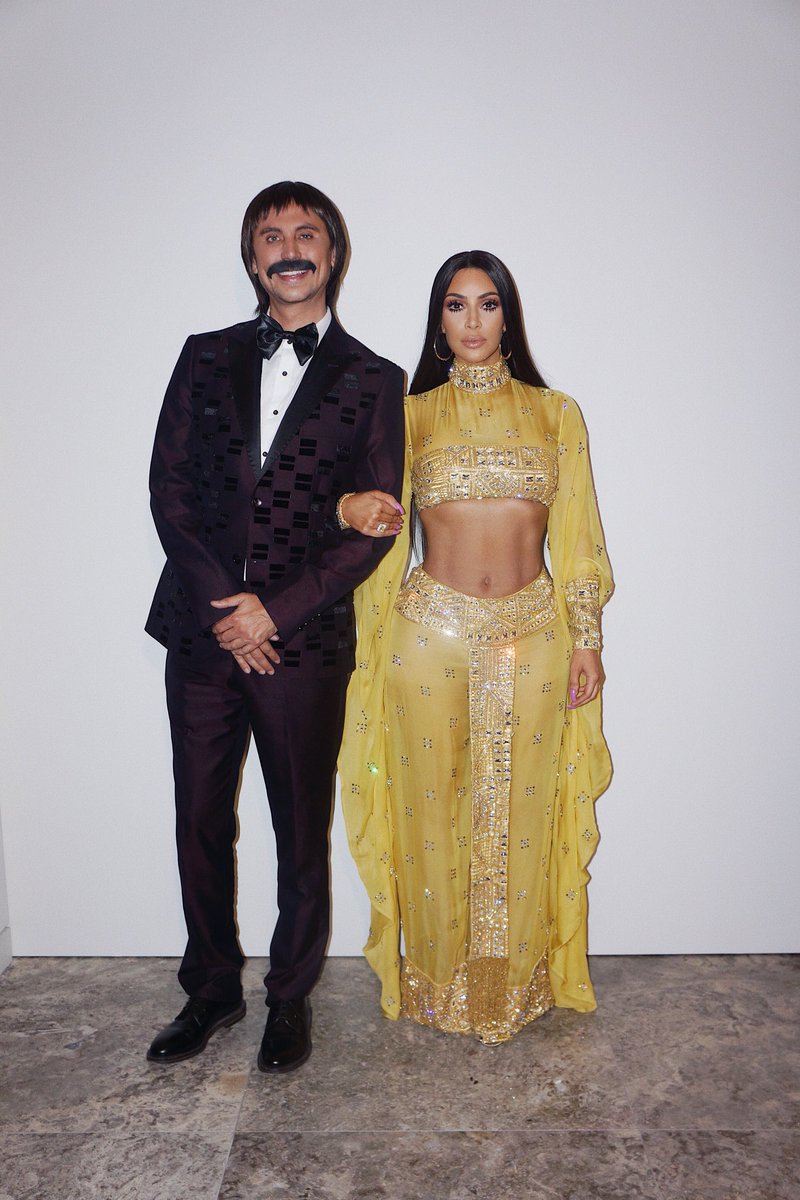 ‘I got you, babe’–that’s what we picture Jonathan Cheban crooning to BFF Kim Kardashian while they rocked these throwback costumes at the annual Casamigos Halloween Party in LA.

Always the style icon, Kimmy took an excellent opportunity to don a sleek, miles-long black wig and show off her toned midriff as the ever-adored Cher. (Wonder if she’ll have anything to say on her notorious Twitter account about Kim’s impersonation?) Jonathan accompanied her perfectly with Sonny’s trademark (somewhat seedy) moustache and a loud, patterned suit.

Get Kimmy’s look by straightening your hair and defining a strong middle part. Pop on some mauve or purple eyeshadow, a startlingly fluttery pair of statement lashes and you’ll be good to go. 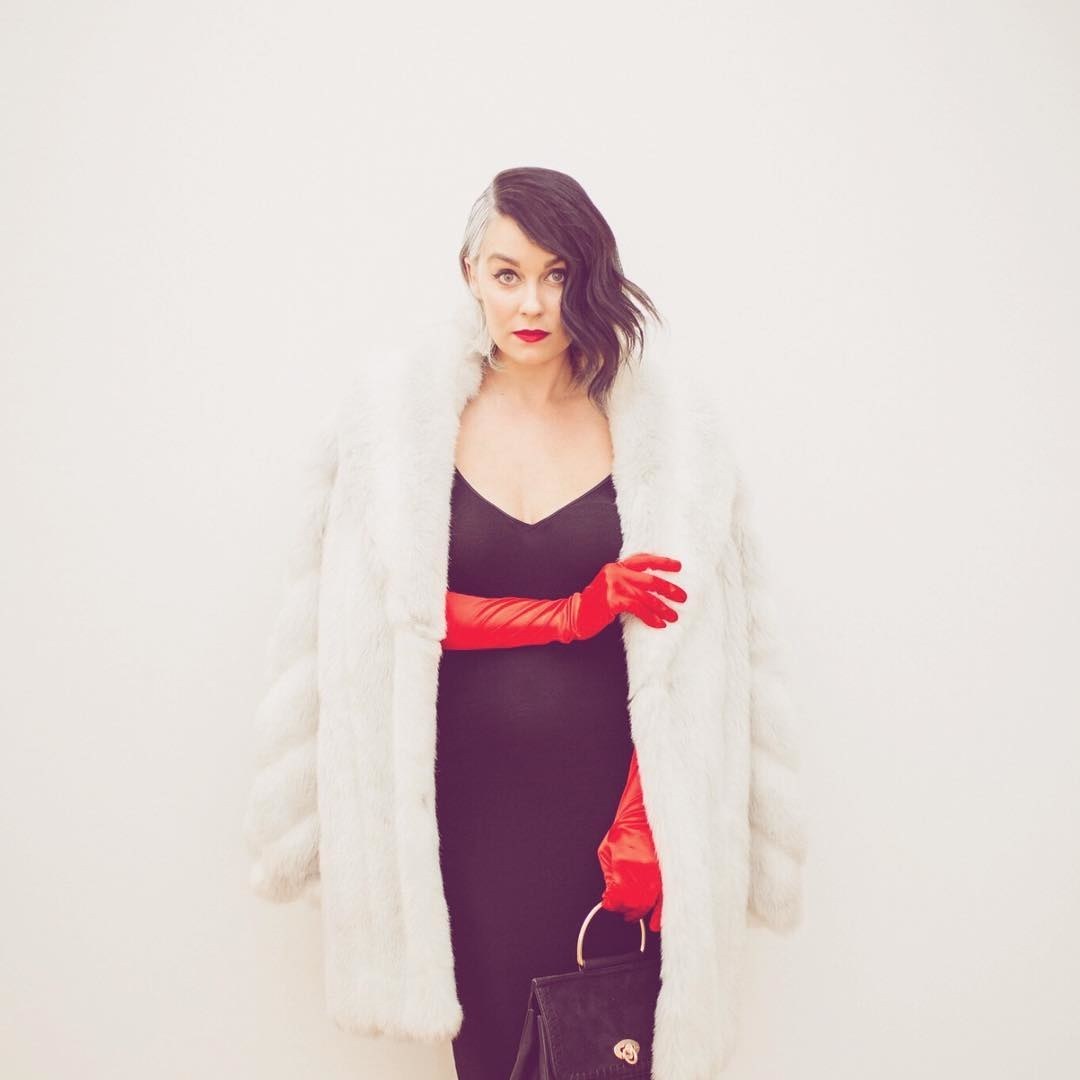 Cruella de Vil from Disney hit 101 Dalmations is a staple come Halloween time, and this year, it’s LC that’s risen to the challenge. After all, when a costume is so widely known and loved, it can be hard to put a fresh take on it…unless you’re Lauren Conrad.

Perhaps the most fashion Cruella we’ve ever seen, Lauren took to her trademark messy bob with black and white colour on opposite sides. She defined a sharp brow, played up the eyes with a thick line, and finished it all off with some bright red lipstick. Throw on a (fake) fur coat and you’re good to go as this renowned Disney villain!

Here’s what you’ll need to recreate LC’s Cruella look for next year’s Halloween. 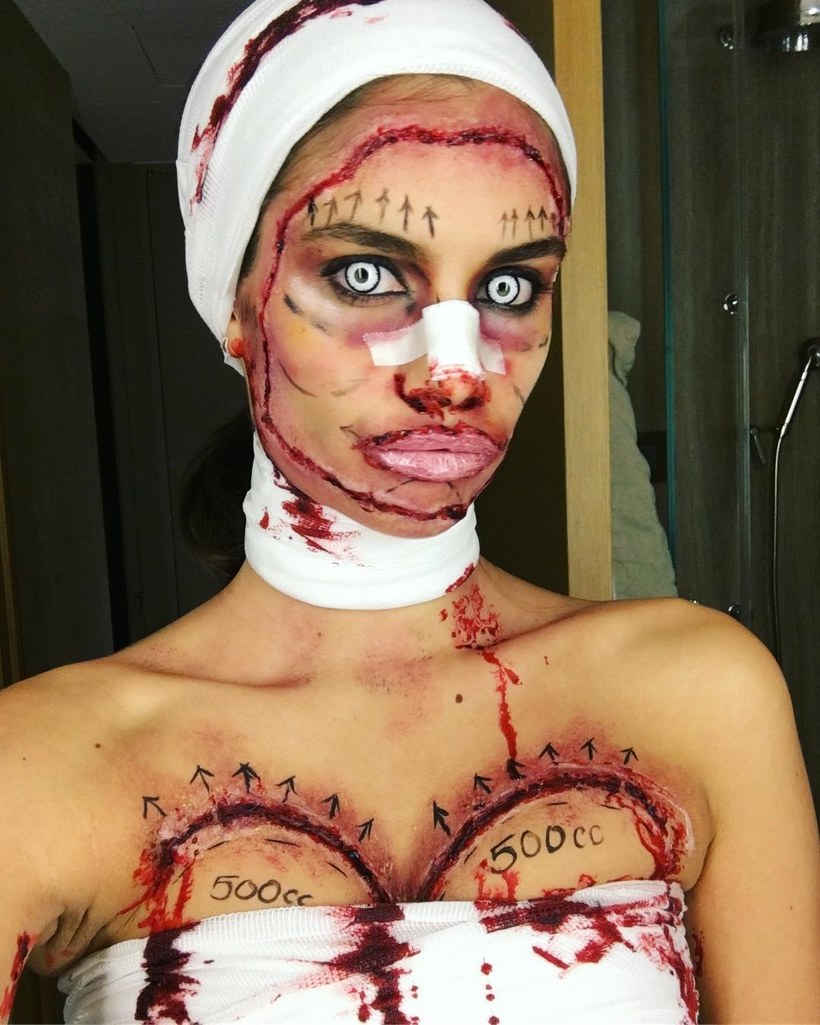 One of the easiest yet most effective costumes we’ve seen this Halloween, supermodel Sara Sampaio played on our generation’s plastic surgery addiction. This one has admittedly been done before, but Sara manages to put her own scary spin on it with white contacts and her signature fierce brow.

Make like your doctor couldn’t finish the job by marking the areas that ‘need work‘ with a liner or skin-safe marker. If you want to replicate incision marks like Sara has done, pop on a little liquid latex with a cotton bud or spatula. Then, it’s all about the blood. Layer scab blood (i.e. blood that clots) with spray blood to achieve a believable look.

PS. We’re not lying when we say this one’s easy–I managed to transform an everyday makeup look into a monstrosity as such in under 10 minutes. It’s a lazy girl’s dream! 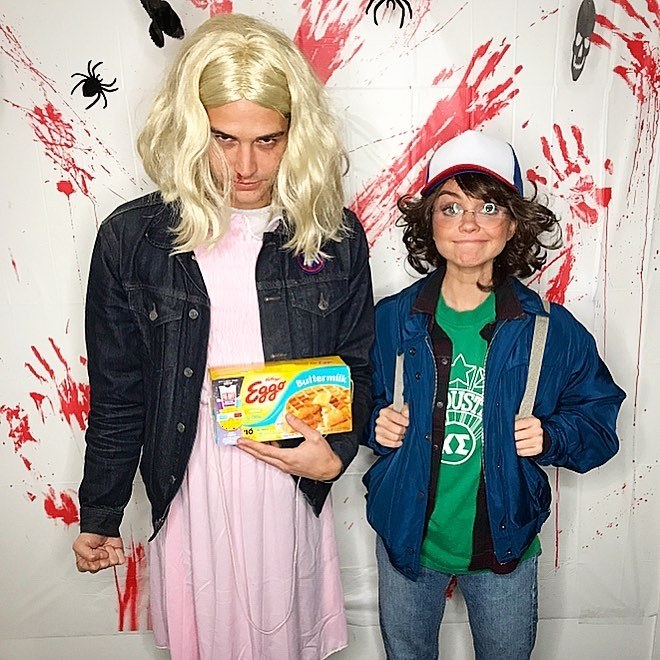 Okay, maybe this isn’t the most fashion couple’s costume of Halloween 2017, but it deserves a shout out for being one of the funniest. Pop culture phenomenon Stranger Things dropped its second season just days before Halloween, making it the perfect, timely costume for any sci-fi lovers (or Netflix addicts) out there.

Modern Family‘s Sarah Hyland and her new beau gender-bent the traditional roles of the show, going as Eleven and Dustin respectively. Not only was Wells able to whip out the blonde wig and pink dress El’s so well-known for, but Sarah got to channel her inner geek as D&D loving Dustin.

Copy Wells’ look with some dark shadow under the eyes to give them a sallow look, and a little fake blood running out of the nostrils. We all know what happens when Eleven uses her powers… Recreate Sarah’s spot on Dustin with minimal makeup, except for a little peachy-pink blush on the cheeks to emulate his  naturally flushed look. 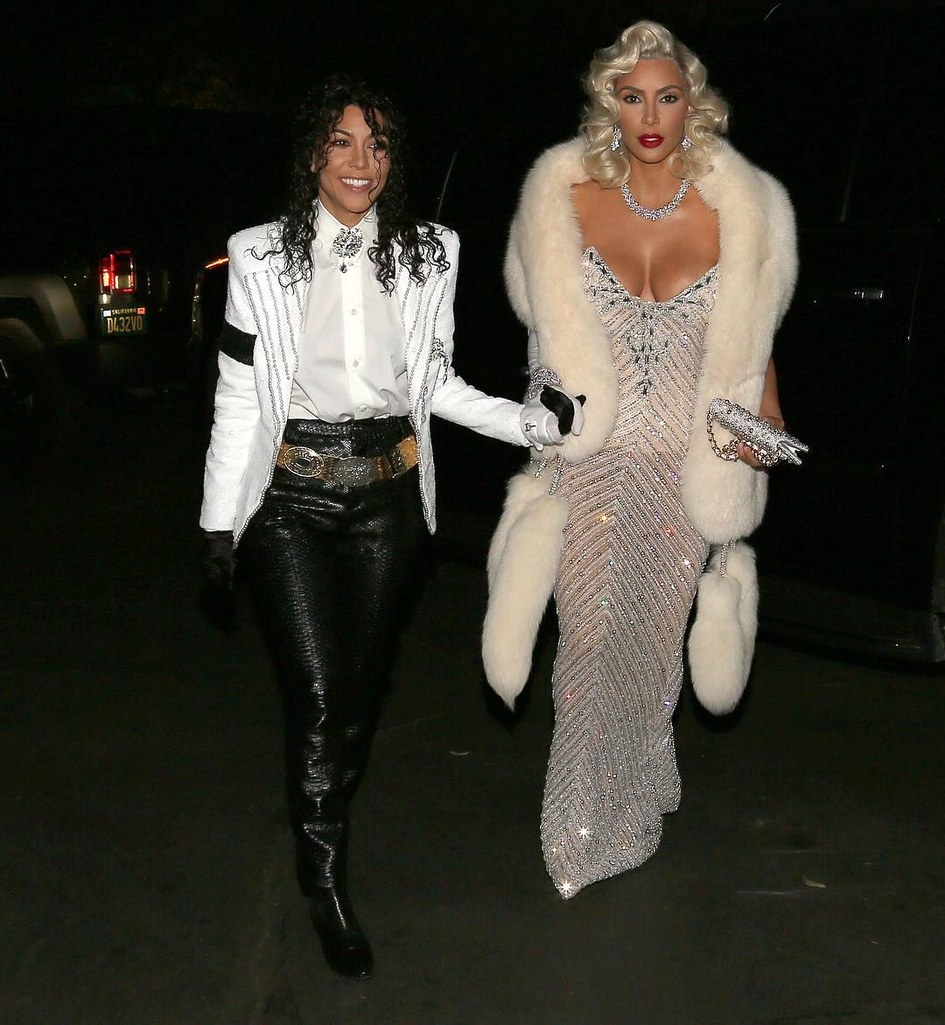 Call us biased, but we think the Kardashians deserve to be on this list more than once–they always slay the Halloween game (and why wouldn’t they, with Kris as their momager?). Another look we’re seriously vibing from the Kardashian Klan this year is Kim and Kourt’s sister costume as two Hollywood legends–Madonna and Michael Jackson.

Kim took on the sexy, blinged-up Madonna look by donning a blonde wig and seriously gorgeous dress. Perhaps one of Madge’s more elegant looks, we’re kinda bummed she didn’t opt for the cone bra era, but floored nonetheless with this beautiful getup. Ensure you replicate her flawless complexion with a good foundation, and don’t forget some killer red lips.

Kourt, meanwhile, erred more on the side of humour and appreciation as the late, great Michael Jackson. In a trademark black and white ensemble with all of the trimmings, the petite reality star cut a handsome figure. Tightly curled ringlets and some extreme contouring on the nose helped sell the overall MJ vibe.

The Best Valentine’s Day Gifts For Him

Get Melbourne Cup Inspired With These 2016 Racing Season Looks

This Affordable Haircare Brand is a YouTuber Fave